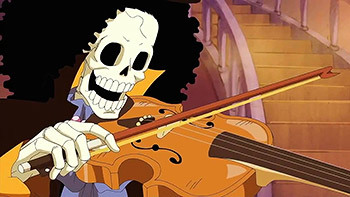 Dem Bones are a varied bunch - some are mindless necromantic Mooks, some are powerful liches, some are snarky talking skulls, some can dance, and some are Skeletal Musicians. The skeletal musician may sing (despite the Fridge Logic involved in singing without lungs or vocal cords) or play an instrument - xylophones improvised from their own or another skeleton's rib cages are a popular choice. A group of them may serve as the backing band for The Dead Can Dance. See also Ethereal Choir and Ghost Song, which can both accompany this.

This is an old trope - dating back at least as far as the Dance of Death depictions of the late Middle Ages - and still in use in the 21st century. Skeletal musicians are normally free-willed undead and are more likely to be comedic than scary. Expect a joke about trombones at some point.

Skeletal Musicians don't have to be true undead - skeletal versions of the Grim Reaper count; as do symbolic figures such as the denizens of the medieval Dance of Death and Jose Guadalupe Posada's satirical cartoons. If they're bony and making music, they qualify.

Please note that while skeletons are a common feature of Real Life musicians, characters whose bones are covered in layers of meat and skin do not qualify for the trope.

Not to be confused with underfed Starving Artists, or with "Bones Trombone."

Tends to overlap with Xylophones for Walking Bones, although that trope doesn't require the music to be played by - or on - a skeleton. Many examples also tend to be Friendly Skeletons.

Example of:
Awesomeness Is Volatile