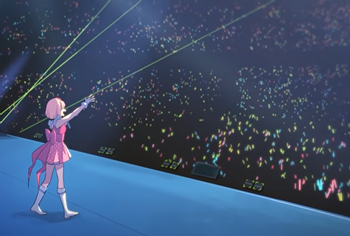 This is how a true star lights up the night.
"I always keep a lighter in my back pocket. I'm not a smoker; I just really like certain songs."
— Demetri Martin
Advertisement:

Whenever some epic music plays, (or usually just any music) there's a chance of some guy raising up a lighter, cellphone, candles or just miming doing so and swaying with the music (or the music in their head). Maybe they get a crowd to join in on it, or maybe they are the only person going with it, just standing there as if they were at a concert, when they are at a wedding reception. Either way, it's usually Played for Laughs as well as to bring melodrama into the moment. Occasionally, it might even have the lighters set off fire alarms or sprinklers.

The lighters were originally used as silent applause during an encore, and also perhaps as an homage to the stories about audience members at Woodstock lighting candles. In particular the practice became associated with Lynyrd Skynyrd and the audience reaction to "Freebird". Its use has extended occasionally to otherwise very moving songs as well (or in the case of parodies, maybe not so moving songs).

In modern times, some people may hold up their cell phones with the light on instead and there are even smartphone apps intended to simulate the look of a lighter's flame. Much safer than using fire; just don't drop or lose your phone.

As this is incredibly common at concerts, please limit Real Life examples to special or unusual variations of this trope.