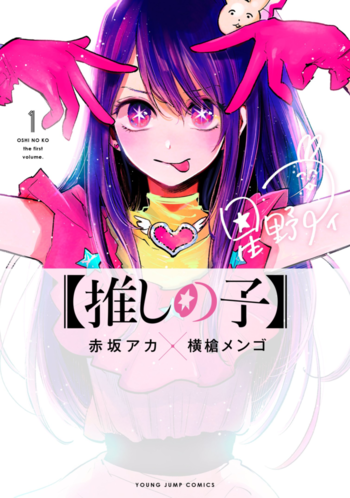 In the world of entertainment, lies are weapons.
Have you ever wondered what it would have been like if you were born as the child of a celebrity?
Advertisement:

In the rural town of Takachiho, in Japan's Miyazaki prefecture, a man named Goro works as an obstetrician in a hospital. His life changes dramatically when the 16-year-old idol he admires, Ai Hoshino, suddenly takes a break from work and appears before him because she is pregnant with twins. Right before Ai bears her children, though, Goro is killed by an unknown man. Moments later, he wakes up in the arms of his idol, reincarnated as one of her children.

Now living his second life as Ai's son, Aquamarine, and with his memories intact, he wishes to watch over the life of his idol in the entertainment world. Then it turns out, his twin sister reincarnated just like him...

Oshi no Konote The common way to read it is "The girl (idol) I support", but it also can be read as "The children of the girl I support". (推しの子), also known as My Star, is a collaborative work between Aka Akasaka (ib: Instant Bullet, Kaguya-sama: Love Is War), who serves as author, and Mengo Yokoyari (Kimi wa Midara na Boku no Joou, Scum's Wish), who serves as the artist. Since April 2020, it is published in Shueisha's Weekly Young Jump.

An anime adaptation was announced on June 9, 2022, to be produced by Studio Dogakobo.

Oshi no Ko contains examples of: