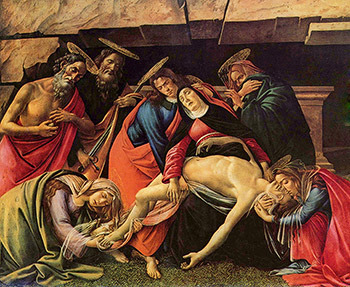 "Margaret Sullavan was a star whose deathbed scenes were one of the great joys of the Golden Age of movies. Sullivan never simply kicked the bucket. She made speeches, as she lay dying; and she was so incredibly noble that she made you feel like an absolute twerp for continuing to live out your petty life after she'd ridden on ahead, to the accompaniment of the third movement of Brahms' First Symphony."
— Gore Vidal, F. Scott Fitzgerald's Case
Advertisement:

Basically, the spectacle involved in a character's death is proportional to the importance of the character to the story.

This is why the faceless Mooks and Red Shirt characters die in droves, while the Big Bad gets a second chance at redemption, or at least is taken out in the most spectacular blaze of glory the FX budget allows. Main characters get to go out with a bang instead of a whimper, complete with Heroic Sacrifice and final dying speech. (And then the reaction is proportional to the drama.) Unless someone was Distracted from Death, anyway.

Thus, if a main character dies in a decidedly undramatic or anti-climactic way, the creators are often accused of having Dropped a Bridge on Him, even if they were shooting for realism and trying to subvert the notion that Death Is Dramatic. Typically, "deaths" like that are a major clue that No One Could Survive That! and that the hero will be back shortly. So when such a death turns out to be permanent, the fans feel cheated. This will generally cause a tidal wave of revisionist Fan Fic.

Related to the Rule of Cool and Kill 'Em All. Reactionary Fan Fic will usually invoke He's Just Hiding!. Also related to Player Death Is Dramatic where it's a videogame that makes the death of the player character a big deal.

Since this is such a common trope, most of the examples will be subversions. Works in which Anyone Can Die usually do away with this trope altogether, so there's no need to explicitly mention them here.

Naturally, this is Truth in Television; since death tends to impact us in direct proportion to how close we were to the deceased in real life. As for how dramatic dying actually is for the person dying, no one's come back to comment.

Contrast Surprisingly Sudden Death and Dropped a Bridge on Him, which don't have the same qualms about portraying death as unexpected and unceremonious. Compare Wring Every Last Drop out of Him.