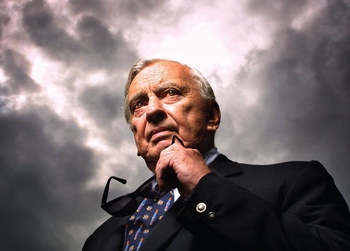 In the world of literature, he was best known for his breakthrough work The City and the Pillar, the first post-war novel to feature a homosexual protagonist who isn't bumped off at the end of the story. A quarter-century later, Vidal began penning a series of historical novels based on the formulative years of the United States, including a third-person account of President Lincoln which met with high accolades.

Best known by a later generation as procreator of two dubious cinematic efforts, Myra Breckinridge and Caligula. Vidal tried disowning the latter, but his lawyers moved too slowly and thus his screen credit remains. Nevertheless, he did appear in a fake trailer for a Caligula remake, so at least he was a good sport about it. Later in life, he accepted the odd acting role onstage and in film, most notably as the title character's Senate race opponent in Bob Roberts, the space shuttle impresario in Gattaca and a priest in Igby Goes Down.

Vidal was politically active throughout The '50s and Sixties, appearing on television as a spokesman for the "New Left" and sharing a panel with his ideological opposite William F. Buckley Jr. This arrangement didn't last long, as their exchanges became increasingly heated until Buckley threatened to punch him in the face on-air. Vidal was also an outspoken critic of monotheism, believing it to be the most dysfunctional of all belief systems. Buckley was a Catholic who gained national recognition with God and Men at Yale, a critique of secularism in academia. The debate series is depicted in the well received documentary, Best of Enemies.

Gore died at his home in California on 31 July 2012 at the age of 86 from complications of pneumonia.

Tropes in the works of Gore Vidal: