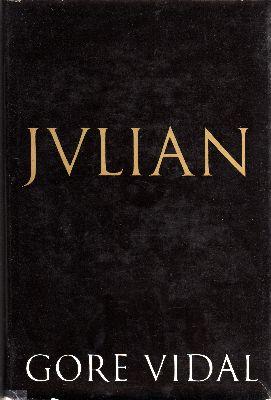 Julian is a 1964 historical novel by Gore Vidal.
Advertisement:

Seventeen years after Julian the Apostate, so-named for his efforts to revive Hellenistic paganism, was slain on the battlefield, Nicene Christianity has become the state religion. His old teacher Libanius bemoans this and proposes to Julian's old friend Priscus that they write a biography using Julian's unfinished memoir.

The memoir, with margin notes by Libanius and Priscus, tells Julian's story covering his youth as a royal hostage to his ascension to Caesar and then Emperor. Despite early successes in his reign, Julian's headstrong and superstitious nature begins to affect his decisions, culminating in a disastrous invasion of the Sassanid Empire, and his death.

The novel is known for its vivid detail in bringing the Ancient World to life, and especially for its portrayal of Roman society without the Hollywood History typical of most historical recreations. Indeed Vidal spent years researching the life of Julian and famously published a bibliography of reference material at the end of the text to serve as a guide to critics and scholars.