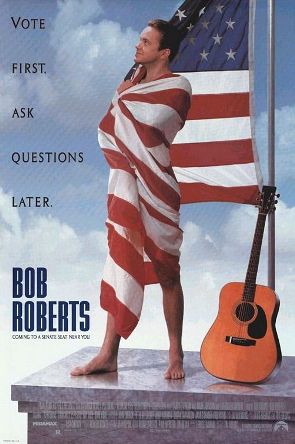 Bob Roberts is a satirical Mockumentary about a fictional American political figure, and the first movie directed by Tim Robbins, who also wrote the screenplay and played the title character. It was released in 1992.

Bob Roberts is a rising star of the Republican Party. On the occasion of the campaign for the forthcoming Senate elections (which take place in the context of Iraq's invasion of Kuwait and US response from 1990), a British film crew follow him as he raises support in his home state of Pennsylvania. Roberts is young and charismatic, with a populist touch which he cultivates by playing folk songs at political rallies taking off Bob Dylan songs with the exact opposite messages (even with music videos like Dylan's). His message is one of social and moral conservatism, based on family values, faith in God, an overt rejection of the heritage of the 1960s (he was raised on a commune by hippie parents), and very pro-business policies. Running against an incumbent liberal Democrat (played by Gore Vidal), he projects an image of plainspoken honesty and dynamism.

As the movie goes on, however, people start whispering about Bob's funding coming from sources that are significantly less wholesome than the image he's cultivating. About halfway through, he survives a faked Assassination Attempt. The results of the election — both political and personal — come out less rosy than expected going in.