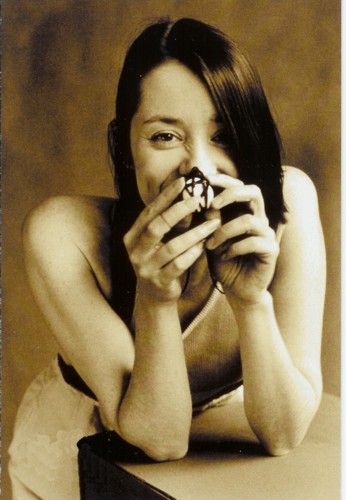 She is watching you.
When they ask me, "What are you looking at?"
I always tell them, "Nothing much, not much"
I think they know that I'm looking at them
I think they think I must be out of touch

But I'm only in the outskirts, and in the fringes
On the edge and off the avenue
And if you want me, you can find me
Left of center, wondering about you
-"Left of Center"
Advertisement:

Suzanne Nadine Vega (born July 11, 1959) is an American singer, songwriter, and record producer. She is best known by the mainstream for the radio hits "Luka" and "Tom's Diner", but her entire career is something to appreciate.

Her musical style, while it has evolved throughout her career, is an instantly identifiable cocktail of multi-instrumental folk and soft, ethereal rock, with heavy reliance on melodic guitar and honest, unaffected vocals. Her songs cover a wild range of topics, but most are united by the theme of sensitive, detailed observation of both the human and natural worlds and often contain much symbolism and introspection.

"Tom's Diner" was used as the reference track in an early trial of the MP3 compression system, earning her the distinction of being the Mother of the MP3. It was chosen because her a capella vocal with relatively little reverberation was used as the model for Karlheinz Brandenburg's compression algorithm. Brandenburg heard "Tom's Diner" on a radio playing the song. He was excited and at first convinced it would be “nearly impossible to compress this warm a capella voice.”

In 1990, two British music producers remixed "Tom's Diner" and released it limitedly to clubs under the name "DNA" without permission from Vega, PolyGram, A&M Records, or the music publisher. A&M quickly discovered the remix...but didn't sue them. Instead, they bought and released it fully, and it became a larger hit than it originally had been.

Another notable song is "The Queen And The Soldier" (1985), the characters of which have an active fandom to this day.

Today I am a small blue trope: