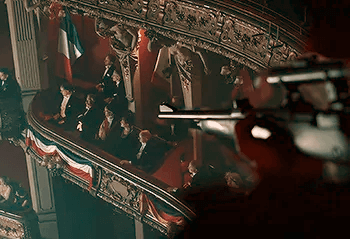 "You come at the king, you best not miss."
— Omar Little (paraphrasing Ralph Waldo Emersonnote who said, “When you strike at a king, you must kill him.”), The Wire
Advertisement:

The leaders of countries — Kings, Presidents, Prime Ministers, Chancellors, etc. — are the most famous, rich, and as a result powerful people in the world. Everybody from their home country at least knows about them because the fate of their nation may sometime depend on them (no stress!) and that goes for any politician. Of course, for that same reason, some things a politician may do, say, or simply be may anger some residents. And some residents may be very angered to the point that they want to threaten your life and therefore attempt to take it.

Just as any character getting shot on TV is, assassinations are no less dramatic (of course, they do bear some Truth in Television—a public figure getting shot doesn't happen on a day-to-day basis). They have a shock value. On TV, if it's a political drama, it's probably a Wham Episode, and though any public figure can be a target of one, it's almost always against the President.

Note that it isn't done by some angry commoner all the time. Sometimes, it may be a part of a Government Conspiracy. Maybe it was the CIA, or the Mafia, or the Vice President or the Russians, because you found out something you weren't supposed to or the VP is jealous.

Tragically, this is a Truth in Television, as there are various Real Life examples of assassination attempts against public figures, some of which have emerged successful. Sister Trope to The Kingslayer. Compare with Conspicuously Public Assassination. If the entire assassination is a ruse, see Fake Assassination.

Because assassinations may result in death, spoilers may be unmarked.