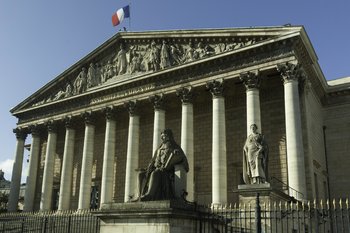 The Palais Bourbon in Paris, home of the lower legislative house of every French government since 1798, up to and including today's French National Assembly.
"Article I - Men are born and remain free and equal in rights. Social distinctions can be founded only on the common utility."
—Declaration of the Rights of Man and of the Citizen, 1789note Whole text on quotes page
Advertisement:

France is famous for having gone from a monarchy to a republic, but its political system has changed no fewer than ten—that's right, ten—times since Louis XVI's head came off in 1793, generally through revolutions.

Presidents of the Fifth Republic are now listed here, along with the other French presidents.

France under the Fifth Republic is a semi-presidential unitary system, with both a President and a Prime Minister. This means, in theory, that both the President and PM have quite a bit of power. In Real Life, however, it means:

The president was elected for seven years until a reform in 2000 that turned it into a five-year term. The goal was to synchronize the presidential election with the legislative one, eliminating or at least seriously reducing the odds of a cohabitation. The presidential election is in two turns: usually more than ten candidates run for the office, and only two remain during the second turn. This leads to one of the more likely scenarios for a future cohabitation: if there were to be another repeat of the 2002 race (in which the far-right candidate managed to make it into the second round because the mainstream left was too fractured, giving the center-right candidate an easy second-round victory; theoretically the opposite could happen but it's unlikely as historically there are fewer right-wing parties and presidential candidates), and the left is less unpopular than the Socialists were in 2002 and actually manage to win a parliamentary majority, it's not inconceivable that you could get a cohabitation then.

The French Parliament is a bicameral legislature: the lower house (the National Assembly) is elected via Second Ballot (think Louisiana's run-off system), the PM is always from the political majority in the National Assembly, but the president chooses who from the winning party becomes PM (theoretically, the president chooses whoever he wants, but the PM needs the approval of the National Assembly to govern). The Senate is elected by a college of 150,000 great electors (all of them being elected officials, like deputies in the National Assembly, Mayors of the 36.000 French towns, etc...), and co-write the laws with the National Assembly: because its members are not directly elected, they are usually less known than the Deputies note and when they are better-known then their same-party NA counterparts, for instance if they've made the government or are party leaders, for instance Jean-Louis Borloo (UDI), Jean-Pierre Raffarin (former PM, UMP), or José Bové (EELV) they tend to be assumed to be deputies — sometimes, they aren't deputies OR senators or haven't been for years, as with Christian-Democrat Christine Boutin, and often accused of being in the Senate because they were unable to win a "real" election. The same criticism is often leveled at candidates to the European Parliament, which is one of a number of reasons why few French voters care about the European elections.

The president of the Senate is the "second most important person of the State". While not as powerful as the PM, if the President of the Republic dies or is incapacitated, the Senate president assumes his function until the President comes back to work or a new President is elected. note This has happened twice in the history of the Fifth Republic, namely following Charles de Gaulle's resignation as president in 1969 and, some 5 years later, Georges Pompidou's death while in office in 1974. In both cases, the Senate president was Alain Poher, a Senator from a centrist party; he stood to be permanent President in 1969, but lost to Pompidou in the second round; he declined to stand for the permanent presidency in 1974, in part because he didn't really want to and in part because Valéry Giscard d'Estaing (the eventual winner) had more support within the centrist bloc. Finally the economic, social and ecological council, which is made up of representatives of "professional organizations" (yep: trade unions have their own legislative chamber in France), is the third and least powerful chamber. (It only has a consultative role, yet going against it too often is not the smartest thing to do, being akin to declaring war against the very easy to anger French unions. God knows how many governments have lost elections or became powerless because they pissed them off.)

The Constitutional Council supervises elections and rules on the constitutionality of laws both before and after they take effect. In this respect, it is similar to the United States Supreme Court, although it is not at the top of the judicial hierarchy. The French have an allergy to judicial power and judge-made law dating back to the parlements (which were law courts) of the ancien regime, and as such have developed a highly complex and overlapping judicial system designed to confound the ability of judges to act as a check on the other two branches; as a result, the Constitutional Council is one of three high judicial bodies in France. The "Cour de Cassation" is the court of last resort for all judicial cases (civil and criminal) and is the only one of the three bodies that is strictly judicial. The "Conseil d'Etat" (lit. Council of State) —which also has some advisory functions to the executive—for all administrative cases. The members of the Constitutional Council are 9 councilors nominated by the "three presidents" (President of the Republic, president of the National Assembly and president of the Senate). Former Presidents of the Republic are rightful members. The council currently has 12 members, with two surviving former Presidents of the Republic : Valéry Giscard d'Estaing, Nicolas Sarkozy. Although Nicolas Sarkozy has since resigned from it, since 1. members of the Constitutional Council are supposed to stay neutral with regard to party politics and 2. because the CC decided to invalidate his 2012 presidential campaign funds. François Hollande, most recent former president, is allowed to join but has not sat on the council as of January 2020.

France used to be a very centralized country (Paris' urban area still has almost 20% of the population), but in recent times political power has become more decentralized; this is just as well, since France really is quite diverse and benefits when government recognizes that. France is divided in 26 semi-autonomous Regions, 101 Departments (the most recent admitted being the teensy island of Mayotte

), and more than 36,000 towns, cities, and villages: each of those subdivisions has its own responsibilities and control over its budget. By an ironic twist of fate, until recently, while the President and National Assembly were conservative, most big cities, 60% of the Departments and all but one Region was left-wing ruled. This, of course, created more tension between the state and the local collectivities. In October 2011, the left also gained a majority in Senate, for the first time in the Fifth Republic, but lost it in 2014. The PS also lost many departments to the right in the 2015 departmental elections.

Currently, the main parties of French politics − at least those you are likely to hear or read about in the media − are (from left to right) note Note the words "liberal" and "liberalism" refer to right-wing, free-market capitalism here, not leftism. 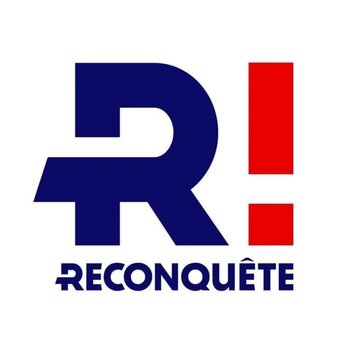