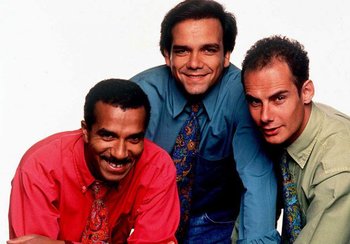 Les Inconnus (literally "The Unknowns") was a Comic Trio of French comedians and actors, the success of which peaked in the early 1990s. It was composed of Didier Bourdon (born January 22, 1959 in Alger), Bernard Campan (born April 4, 1958 in Agen) and Pascal Légitimus (born March 13, 1959 in Paris). Their sketches savagely satirized all aspects of the French (or otherwise) cultural landscape, from show business to advertising, television and politics, and are still heavily referenced to this day.

They were five originally (with Seymour Brussel and Smaïn, who both left), when they had their first successes on stage in The '80s as Les Cinq ("The Five"). When reduced to three, they took the name "Les Inconnus" and became famous for their parodic Sketch Comedy TV show La Télé des Inconnus (literally TV of the Unknowns), which premiered in 1990 and ran with great success until 1993 on the Antenne 2 channel (renamed France 2 since). They made their theatrical debut in 1995 with the comedy The Three Brothers (Les Trois Frères).

After Les Trois Frères came out, their manager Paul Lederman claimed ownership on their group name by lawsuit, causing them to drop the use of it, and they never made sketches together again. Nonetheless, several films have featured at least two former members together since. 2001's Les Rois mages (The Three Magis) and the 2014 sequel to Les Trois Frères, Les Trois Frères: Le Retour (The Three Brothers are back) reunited them all. Most of said movies were written and directed by Bourdon and Campan.

The group's works provide examples of: