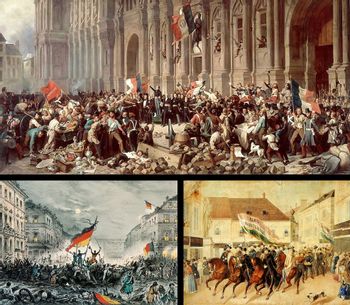 The Spring of Nations
1848 was the turning point at which modern history failed to turn.
— G. M. Trevelyan.
Advertisement:

A series of European revolutions which, funnily enough, took place in 1848. They failed.

First, rewind to 1815. The end of The Napoleonic Wars was essentially a victory for reactionary forces. They blamed Napoléon Bonaparte on the radicalism of The French Revolution, which ironically, Napoleon wanted to end. Thus, as the allies met in Vienna to decide the fate of post-war Europe, their aim was to prevent anything like the French Revolution from happening again. The traditional European order, divine-rights monarchs and suchlike, was to be restored as much as possible. The crowned heads of Europe agreed that when one of them was threatened by the next would-be French Revolution, they would act together to put it down.

Fastforward to 1848. A wave of revolutions swept across Europe as the people of various countries rebelled against the post-Napoleonic conservative order. Who were these people that rebelled? Generally, they were a mix of liberal republicans, radical socialists, and various kinds of nationalists — in other words, people who had little in common other than their shared opposition to the current order in Europe. These differences allowed reactionary forces to use a Divide and Conquer strategy, combined with their superior military force, to regain control of the situation. By the early part of 1849, the revolutions had been crushed, but they had begun to change many Europeans' way of thinking about society.

Quite a lot of stuff happened during and as a result of the Revolutions of 1848:

The actual consequences of 1848 and Europe as a whole have been debated by historians. The consensus is that the Revolutions failed but were widespread enough to force governments on a path of reform, and directed many reactionaries in favor of social reforms that they would formerly have regarded as an outrage but now considered Necessarily Evil. The suppression of the revolutions also showed the greater power and authoritarianism of European and Central European nations. The biggest impact of these events in the eyes of historians is the "lessons" various participants and observers learned from it. Bismarck believed that the liberal regimes and reformers should revolutionize from above and, in effect, bribe the lower classes via The Moral Substitute. Marx and his later interpreters felt that the events failed because of a lack of cohesiveness and organization, and that later revolutions would need to be organized and coordinated. So at once it was a sign of its times and couched in the rhetoric of 19th Century republicanism, but it was a sign of things to come as well.

The Arab Spring of 2011 has often been compared to the Revolutions of 1848.