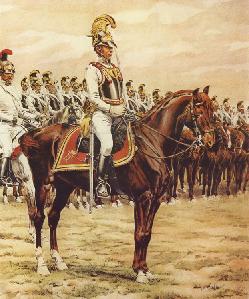 "That extraordinary empire known as the Austrian-Hungarian Dual Monarchy is less an Empire or a Kingdom or a State, than the personal property of the Habsburgs, whose hereditary talent for the acquisition of land is recorded on the map of Europe today!"
— James W. Gerard (1867-1951), American diplomat
Advertisement:

The Habsburg Empire was not a normal empire. Even when Austria was the premier power, its preeminence was not the same as that of Russia under the Tsars. Rather the Habsburgs, one of the great houses of Europe, were the feudal system taken to its logical extreme, with dozens of nations having no connection to one another except their joint allegiance to the Habsburg Family. (Note that the spelling "Hapsburg," common in older English translations, is not considered the most correct.) Therefore it is proper to refer to their state (and by extension its military) by reference to The Family. (Not that one despite occasional resemblances.)

The first Habsburg king was a warlord named Rudolph who was Feudal Overlord of an alpine fortress called Habichtsburg (now in Switzerland note The Habsburgs had terrible experiences with the Swiss, losing their home territories in what is now Switzerland, including the Aargau with Habsburg Castle, to the expanding Swiss Confederacy after the battles of Morgarten (1315) and Sempach (1386); the Duke of Austria Leopold III was also killed at Sempach. Habsburg Castle itself was finally lost to the Swiss in 1415.), which translates into English as "the Hawk's Castle", whence the name "Habsburg." He was elected "King of Germany" (not Emperor of the Holy Roman Empire note Frederick III (reigned 1452 – 1493) was the fourth king and first emperor from the House of Habsburg.) in Oct 1273, because of his lack of resources, which it was hoped would make him controllable. As it turned out, Rudolph had considerable military skill and sacked enough rebellious barons' castles to persuade them of the advisability of good order and loyalty to the crown. Rudolph and his son Albert both became Kings of Germany, but were never crowned Holy Roman Emperor. After Albert's assassination in May 1308, the house's fortunes sagged a little; the next king from the house was Albert II in 1438.

The Habsburg family became known for its skill in diplomacy and acquired many possessions by marriage, giving rise to the motto "Let others wage wars, but you, merry Austria, marry!" (Bella gerant alii, tu, felix Austria, nube!). At one time, because of a previous merger with the royal family of Spain, it was an empire with holdings in the Western as well as the Eastern hemisphere, becoming the first "Empire on which the sun never sets"; however, the Spanish-based section of the family and the Austrian-based one were split, with Charles V giving Spain and the Netherlands to his son Phillip (Felipe II of Spain) and the Central/Eastern European realms to his brother Ferdinand, and the Spanish branch eventually died out for lack of male issue (and sanity).

The Habsburg imperial forces were always a motley and colorful patchwork of levies from their various possessions as well as mercenaries. They probably reached their greatest height of prestige during the Italian Wars, in which they took on France- previously the most feared army in Europe- and the wealth of Italy and utterly, brutally crushed both under heel. This ushered in almost a century of continuous Habsburg dominance that only began to slip during The Eighty Years' War and Thirty Years' War decades later. The latter saw brilliant but ruthless general Wallenstein fight on against the enemies of the Empire and win a number of battles — only to lose his position due to anti-Imperial Western intervention hammering his army coupled with an overweening personal ambition.

After that the Habsburg forces mostly just scraped by. They could always field a decent army, but rarely a Badass Army, though exceptional generals like Tilly, Eugene of Savoy, or Archduke Charles of Austria-Teschen occasionally won outstanding victories. It was, however, always a colorful force and had as one of its most interesting features a number of Proud Warrior Races from Central Europe and the Balkans, such as the Hussars from Hungary and the Grenzers from Croatia, Serbia and Romania. Slightly less romantic were the rather stolid ethnic Germans from Austria and allied states. Unfortunately being a "colorful" force was also its own downfall. The diversity in the armed forces, comprised of conscripts from dozens of ethnicities together speaking more than ten languages often made command and control difficult. They won few spectacular battles, but they did keep the Empire together until World War I which ushered in the end of the Habsburgs as a state and the end of their military. By this time the Austro-Hungarian forces were probably one of the worst armies in Europe. Before Russia's domestic collapse in 1917, the Russian Army under Brusilov utterly smashed their Austro-Hungarian opponents in Ukraine, to the point that Imperial Germany had to bail them out. The Austrians also suffered embarrassing defeats at the hands of the much smaller Serbian army, again only managing to occupy the country with substantial German aid. The Austro-Hungarian army had considerably more success against the incompetent Italians, to the point Germany felt it could only trust Austria to hold the Italian Front... but in the end they still managed to lose! It should be mentioned that many of the Austro-Hungarian soldiers were Slavs, and were understandably reluctant to fight against other Slavs for the sake of German or Hungarian masters.

One rather odd victory they had was Lissa, in which they defeated the Italian fleet in the war with Prussia and Italy in the nineteenth century — probably the only naval battle the Central-European Habsburgs ever won. Also, while their battleships did practically nothing during World War I, the tiny Austrian submarine force managed to pull off some amazing stunts; Captain Von Trapp (made popular in The Sound of Music) was their greatest submarine ace. Another peculiarity noted by historians was that by the end of WWI, the Austro-Hungarian Army "laid down their arms" (rather than surrendered); they outlasted the Empire they served.

Rather amazingly the last Austrian Crown Prince, Otto von Habsburg (or Otto Habsburg-Lothringen in Austria)note he - like the rest of the Habsburgs - was legally barred from using the 'von' in the Austrian Republic after their official abrogation of the nobility in 1919 lived until the ripe old age of 98, dying on the 4th of July, 2011

. Had he actually succeeded his father on the throne he would have reigned for 88 years, becoming one of the longest reigning monarchs in European history. A politician of The European Union, he allegedly once punched Ian Paisley after the latter insulted The Pope as the Antichrist in the European Parliament.

House members who have their own pages: