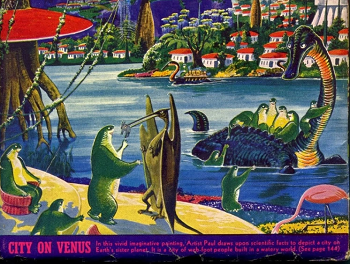 The rain continued. It was a hard rain, a perpetual rain, a sweating and steaming rain; it was a mizzle, a downpour, a fountain, a whipping at the eyes, an undertow at the ankles; it was a rain to drown all rains and the memory of rains. It came by the pound and the ton, it hacked at the jungle and cut the trees like scissors and shaved the grass and tunneled the soil and molted the bushes. It shrank men's hands into the hands of wrinkled apes; it rained a solid glassy rain, and it never stopped.
— Weather Report Opening of The Long Rain by Ray Bradbury
Advertisement:

In the early days of science fiction, the one thing most people knew about the planet Venus (or rather, most people who knew anything about Venus or any other planet in our Solar System for that matter, which at the time included only a very limited group of enthusiasts with university education) was that it has permanent cloud cover over its entire surface. This led to many depictions of Venus as a planet where it rains a lot, often to the point where it's a Single-Biome Planet covered in oceans, or at least swamps or rainforests. This dovetailed nicely with the planet's Roman namesake, as it seemed very appropriate that a planet named for a goddess of fertility and femininity (who was born from seafoam) should be so fecund and watery.

In the 1960s, the planet was visited by unmanned probes which definitively established that the clouds were sulfuric acid, the atmosphere was largely carbon dioxide, and that due to the resulting greenhouse effect the temperature at the planet's dry and barren surface was nearly 900 degrees Fahrenheit (480°C). As a result, this is now a Dead Horse Trope used only by authors deliberately harking back to the old days, or in works involving terraforming. Otherwise, the modern stereotype of Venus is as our friendly neighbourhood Death World.

suggests, however, that Venus did once have water and could have been habitable as recently as around 700 million years ago

, but Venus's lack of a magnetic field caused that water to become disassociated into its component hydrogen and oxygen atoms via solar radiation, leaving nothing to prevent a runaway greenhouse effect and as a result, turning Venus into the dry pressure cooker it is today.

This trope, Once-Green Mars, and Strolling on Jupiter are subtropes to Science Marches On and therefore, more common in sci-fi works of the Two-Fisted Tales variety.