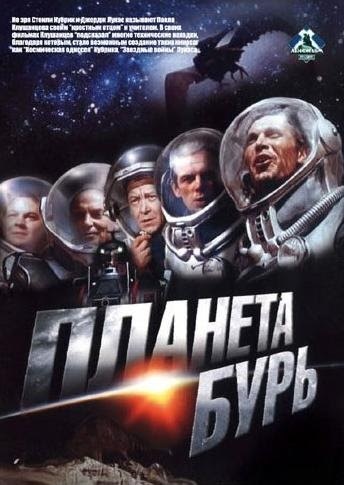 Planet of Storms (Russian Planeta Bur) is a 1962 Soviet film directed by Pavel Klushantsev, based on a novel by Alexander Kazantsev about humanity's first mission to the planet Venus. It was later picked up by Roger Corman's American International Pictures and Re-Cut for U.S. television as Voyage to the Prehistoric Planet in 1965. Two years later the re-cut was re-cut into Voyage to the Planet of Prehistoric Women.

In the original film, the cosmonauts are forced to improvise after one of three ships sent for the mission is suddenly destroyed by an asteroid strike. Two crewmen from one of the remaining ships, the Vega, decide to go down to the surface via glider along with their robot John. After they are blown off course, the crew of the remaining ship Sirius head down to rescue them, leaving only the mission's lone woman, Masha, to stay aloft and communicate with Mission Control.

At this point, what was previously a fairly hard sci-fi film takes a sharp turn to 1 Million B.C. territory, as the rescue team encounters carnivorous plants, dinosaurs, volcanoes and a mysterious sound like a woman singing...

Voyage to the Prehistoric Planet stays largely faithful to the original, though since this was the height of the Cold War, AIP scrubbed all signs of its origin by renaming the characters and leaving the Soviet cast and crew off the credits. Director Curtis Harrington also recast Masha (renamed Marsha) with American actress Faith Domergue, and visualized the previously disembodied voices of Mission Control as a small team led by Basil Rathbone.

Voyage to the Planet of Prehistoric Women, helmed by Peter Bogdanovich of all people, took more liberties by cutting Masha/Marsha completely and shoehorning footage of Mamie Van Doren leading a tribe of scantily clad women who are supposedly orchestrating the crew's difficulties in an attempt to get rid of them. This version also incorporated footage from another Soviet sci-fi movie that AIP had acquired, Nebo Zovyot, which had been heavily reworked into Battle Beyond the Sun for U.S. release.

Planet of Storms and its re-cuts include examples of the following tropes: