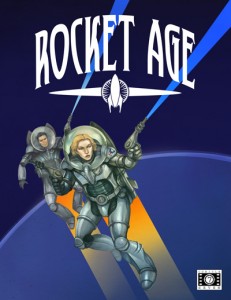 No need to ask "where's my jetpack" here.
"Welcome to the Rocket Age, to the retro-future sci-fi past. It's an age of exploration, of scientific and technological wonders unlike any the Solar System has ever seen... A past that never was, but could have been, a Solar System that isn't, but should be... Ride that radium rocket to the edge of Yesterday and blast off into Tomorrow."
— Ken Spencer
Advertisement:

Rocket Age is an Ennie award winning retro sci-fi RPG written by Ken Spencer. Originally published by Cubicle 7, Spencer bought the rights and published through his own company, Why Not Games. The Rocket Age officially began in 1932 when Nikola Tesla, Albert Einstein, and Robert Goddard built the Eagle, the first Rocket-ship, and flew it to Mars. Now, six years later, things are heating up across the solar system between the super powers, the various aliens they have subjugated and the mysterious Europans...

The setting plays all of the classic sci-fi and pulp tropes to the hilt, from gleaming rocket ships to beautiful Martian princesses. However, it also explores the worst of human (and alien) nature, looking at the real consequences of giving this kind of technology to a bunch of imperialistic superpowers.

Despite all this, Rocket Age is a reconstruction of pulp sci-fi. Every species has heroes, some areas of society have become far more progressive and humanity's world view has been widened by news from across the solar system. The right man in the right place can make a difference, and with a bit of work and a lot of guts, the heroes will prevail.

The gameplay is designed to have a cinematic feel, encouraging big flashy heroics and uses a modified version of the Vortex system designed for Cubicle 7's Doctor Who Adventures In Time And Space. Characters are given Story Points, which can be used for everything from buying new equipment to bending the plot. Rocket Age also encourages diplomacy and problem-solving; for this reason, fighting is the last part of the Action Round. So, if you can talk the palace guard into letting you go or trap the monster without hurting it you'll usually get a chance to before someone gets all trigger-happy.

Currently, there are books covering Mars, Venus, Jupiter and its moons, a system-hopping full campaign, and books expanding on the peoples of the solar system and the asteroid belt. Future releases look to expand on the outer planets and bring the world of Rocket Age into the fifth edition of Dungeons & Dragons's rules