The Straight and Arrow Path 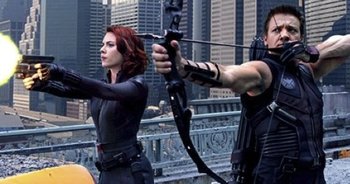 "Okay, look, the city is flying, we're fighting an army of robots, and I have a bow and arrow. None of this makes sense."
— Hawkeye, Avengers: Age of Ultron
Advertisement:

In some modern-day settings, the normal human members of either side will use guns, and often with less than stellar accuracy, regardless of allegiance. Combined with the idea that guns are easy point-and-click weapons, how do you set apart your ranged combat hero with no cool-looking superpowers? Why, give them a bow and arrow, of course! Not only will it prove that they're a Master Archer who's a much better shot than everyone else, but are cool under pressure as well. Crossbows can fit this trope as well, though they're not quite as cool.

Usually, the coolness factor will be ramped up by giving them all sorts of neat arrows that'll come in handy for any situation they might encounter. And of course, their arrows will always be more effective than bullets. Unlimited supply of arrows often included, despite the fact that arrows are pretty large ammunition and not many can be carried in an ordinary quiver compared to bullets.

Before the widespread adoption of revolvers and repeating rifles, bows and crossbows really did have some advantages over guns. A skilled archer with a powerful bow could shoot deadly arrows at an impressive rate, while the crossbow sacrificed shooting speed in exchange for a weapon that could be learned more easily, allowed an archer to span a bow he wouldn't be strong enough to draw manually (with the help of a spanning device), and could hold a bolt at full draw without fatiguing the user. The challenges of military archery were raising (or hiring from elsewhere) enough people who had trained since childhood to draw and shoot powerful bows accurately, stockpiling enough arrows for a campaign ('cause arrows weren't cheap!), and importing the materials needed to manufacture bows and arrows if they couldn't be gotten locally.

The appeal of early firearms was that they were more powerful than bows or crossbows, and just about anyone could be taught to use one. They could also pull double-duty as mêlée weapons through swinging the weapon itself or using a bayonet. The arquebus was good enough to replace the crossbow in Western European warfare by the 16th century, since it filled the same role and did it better. However, the bow could still shoot faster than these single-shot muzzle-loaders, and the English didn't give up on keeping archers as well as arquebusiers until it was clear there weren't enough skilled archers left in the country. Warriors in Asia, the Middle East, and Eastern Europe would often use the bow and musket together for their different advantages. Even in the early 19th century, white settlers on the American Great Plains were at a disadvantage against mounted, bow-using Natives such as the Commanches who could out-pace their single-shot pistols and rifles. Ironically, the fact that Europeans had decided that Armor Is Useless against massed firearms and therefore gotten rid of it left them more vulnerable to arrows, which would have been stopped by plate armor. Samuel Colt's revolver turned the tide in favor of guns by being the first commercially produced firearm to really challenge the bow's shooting rate, and the subsequent spread of breech-loading and repeating rifles rendered the bow outclassed.

Of course, that applies to mass deployment, where the disadvantages of guns aren't a constantly glaring flaw. Take noise as an example: Hollywood Silencer, put simply, doesn't exist — any gun will make a distinct, very audible noise when fired. The only question is how much and whether or not you can pinpoint where the shot came from. Although bows and crossbows aren't actually silent — and in fact a crossbow's mechanism makes a pretty loud "thwack" when shot — either of those is still much quieter than a gun. They also don't produce muzzle flash or powder fumes. In a situation where that matters, such as stealthy military operations or just plain old hunting, the "archaic" arrow/bolt-throwers may be preferred.

Close relative of the Archer Archetype, sometimes overlapping it, though one can exist without the other. This trope regards situations where someone manages to make a bow and arrows a better choice than other, more modern weapons like guns. Often, a hero (or villain) who follows the Straight and Arrow Path can be pretty dangerous with his fists as well; it's all that muscle to pull the draw string.

Subtrope of Archaic Weapon for an Advanced Age. Also related to Guns Are Worthless. Enhanced Archaic Weapon can overlap, while Annoying Arrows often doesn't. Name not to be confused with No "Arc" in "Archery". Likely to evoke a reference to Robin Hood.