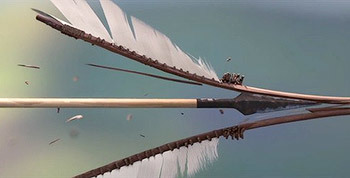 I step into the room, split an arrow with an arrow!
—Aesop Rock, "Jazz Hands"
Advertisement:

Archery is all about precision. The standard archery contest (in both fiction and real life) involves a marked target and points based on how close to the center (or bull's eye) the archer can place his arrow.

A common dramatic situation is one where The Rival shoots first and hits the target right in the center. It looks like The Hero has lost the competition until he shoots his arrow at the opponent's and splits it in half lengthwise.

A downplayed version of this is Truth in Television. It's not unusual for hollow-shafted aluminum arrows to "telescope" — one stuck in the end of another. Most archery ranges that have been open any length of time will have some examples mounted on the wall, though it's considered more of a funny fluke than a feat of skill: It doesn't earn you any additional points, and after the first time it's mostly just annoying that your arrows get damaged. However, in order to really count as this trope, the second arrow has to split the first from nock to tip. This normally requires everyone (or at least the first archer) to be using wooden arrow shafts. Traditional arrows often have a horn nock that would deflect the second arrow unless it was removed, and in practice, most hardwood arrows don't have such a straight grain that they would reliably split all the way down instead of breaking somewhere in the middle. The second arrow has to be made of something like hollow bamboo and specially prepared in order for the trick to work.

In the field, this is known as a shaft shot, sometimes called Robin Hooding, since of course the feat was made famous by you-know-who.

This is a subtrope of Improbable Aiming Skills, and a Sister Trope to Shoot the Bullet. It is often used to characterize someone as a Master Archer. Compare to William Telling and Shooting At Your Own Projectiles.

Disney's Robin Hood, pulls off his iconic move during the tournament.

Disney's Robin Hood, pulls off his iconic move during the tournament.