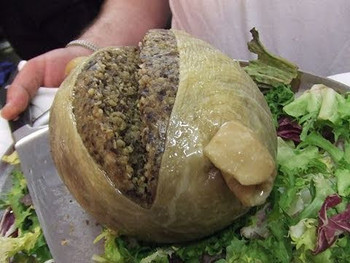 Haggis is a Scottish dish prepared using a sheep stomach, oatmeal, suet, and some of the other internal organs of a sheep (usually liver, heart and lungs).

In fiction, haggis is often viewed as disgusting, in which case no characters will eat or touch it. Sometimes they might first ask what’s in it, and look dismayed at the answer. Other times they might begin to eat it and spit it across the room in disgust upon finding out what's in it. Whatever the reason, it never seems like anybody wants to eat haggis besides the Scottish guy in a kilt. In fact, the United States FDA has banned traditional haggis from sale and import, as it includes lung (known when used as offal in Britain as "lights"), which is not considered fit for human consumption in the US (contrary to most of the meat-eating world).

In reality, because the ingredients are ground up before being stuffed into the stomach, haggis is essentially a large mutton sausage with an unusually thick casing—remember that your garden variety sausage can contain some disgusting-sounding offal, and they don't generally tell you what it is. Moreover, modern store-bought haggis (i.e. most haggis) is made with a standard manufactured sausage casing (like you'd find on pretty much any mass-market British sausage), so basically a modern, mass-produced haggis is a short, thick mutton sausage with entirely known ingredients. People should find it more appealing than the bangers you get at the supermarket...

If you must know, haggis basically tastes like a cross between a hamburger and a sausage. And yes, it really is delicious. Laddie. Robert Burnsnote referred to, variously, as Scotland's favourite son, or "The Bard" - yes, equating him (at least poetically) with Shakespeare wrote a poem about it - Address to a Haggis

- that is read, in full, as the Haggis is presented during a Burns Night supper — which consists of Haggis, naturally enough, accompanied by the traditional Neeps and Tatties.note Swede and Potatoes

A Sub-Trope of Foreign Queasine. Compare Stock "Yuck!". Not to be confused with Hägar the Horrible (though a gag in that comic strip involves haggis).