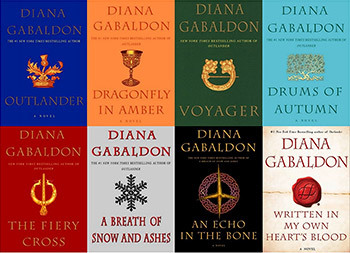 A series of novels by Diana Gabaldon. Claire Beauchamp Randall is taken back in time from 1946 to 1743, where she marries and begins a passionate love affair with Jamie Fraser, a Scottish Highlander. They face many dangers and political intrigues as they attempt to prevent the tragic battle of Culloden from happening. And that's more or less just the first two books. The later books span more than twenty years, expanding the focus of the novels beyond just the main couple to their families, their close friends, and the historical situation in general. Depending on whom you ask, they're romance novels or Historical Fiction — or a bit of both.

Absolutely nothing to do with that film. Also not to be confused with Johji Manabe's manga series from the '80s (and the subsequent anime adaptation) titled Outlanders. Don't confuse it with the 2011 game Outland either.

In July 2019, Gabaldon said on social media that an as-yet unstarted tenth book would be "the last of the main series."

The main series has a spinoff of sorts, the Lord John series, focusing on the life of a secondary character featured in later books, Officer and a Gentleman (and Straight Gay) Lord John Grey.

In 2013, Starz announced a TV adaptation with Ronald D. Moore at the helm. The series premiered on August 9, 2014. The works page for the television series is here.