Literature / Out of the Dust 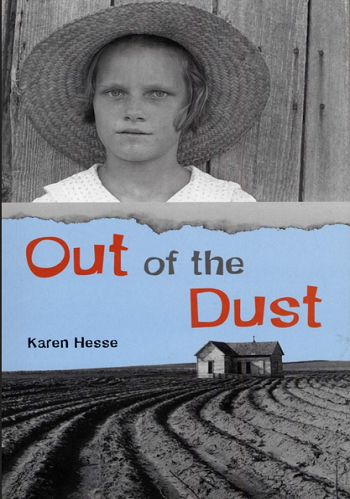 Out of the Dust is a 1997 Historical Fiction novel by acclaimed children's author Karen Hesse. It won the Newbery Medal in 1998.
Advertisement:

The novel is a collection of free-verse poems, making it a unique entry in the world of Children's Literature. The plot deals with its protagonist Billie Jo Kelby, a tomboyish, talented pianist, struggling to survive in the Oklahoma Dust Bowl during The Great Depression. She has a kind mother, nicknamed Ma, who dies tragically, and a distant father, nicknamed Daddy. As the novel progresses, Billie Jo and Daddy learn to endure their tough existences, as well as the hole in their lives created by the death of Ma.