But Not Too Gay 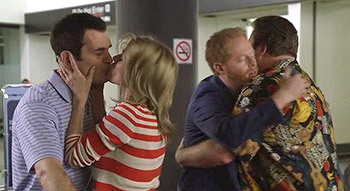 Hot gay hugging action.
"...and even though their relationship is super new and they are super attracted to one another, they do not make out at all.
(Do not drink. That is not gay. That is TV gay.)
— After Ellen

Okay, let's say you're done hiding your lesbians and you don't want to bury any gays. You want to feature a queer character on your show or, hell, make them the starring character! But what if they get a Love Interest? Will they flirt? Kiss? Hold hands? Have anything resembling or implying a sex life? Gay characters enjoy increased visibility in media and numerous positive portrayals. However, there is a bit of a Double Standard regarding same-gender love portrayals and love scenes and the like.

Rather, the lack thereof.

Homosexuality is still a taboo in much of the world, and while some audiences may tolerate a gay character, they may be completely squicked out by shows of affection and sex scenes with gay and lesbian characters, no matter how tame they may be. So television shows and other media don't push the envelope too much on gay affection. There may be a hug, or a meaningful handhold, but never a kiss unless it's heavily promoted and advertised (and even then, don't get your hopes up that it will happen as advertised). If one of the characters is bisexual, don't be surprised if their opposite-sex encounters are as steamy as the rating allows, but suddenly they become as temperate as a monk when they're with a partner of the same sex. So basically, you can have same-sex couples, but they can't be shown actually behaving like a couple.

This is sometimes a case of Truth in Television, as many gay couples in real life avoid being affectionate in public for fear of unwanted attention (as was the retroactive justification for the page picture). But if we see them at home and they act more like roommates than lovers, it comes right back to being this trope. In Anglo-American media, fans and critics have noticed a pattern of female couples being more likely to be shown engaging in sexual activity on screen than males. This is thought to be due to a combination of Male Gaze and assumed Girl-on-Girl Is Hot among male audiences, which has led to lesbianism being turned into a promotional strategy that is expected to attract viewers rather than repel them, combined with an assumption that the same male target audiences will react negatively to homoerotic scenes between men.

Of course, this is a common source of Unfortunate Implications. Values Dissonance plays heavily into this trope regarding acceptance of homosexuality, though, and it varies from country to country, from decade to decade, even within countries and communities. It is all too easy to look at the prevalence of this trope and come to the conclusion that homosexual couples are fine if they're on TV...as long as they don't show any sexuality. As the tolerance toward homosexuality grows, this trope is fading little by little, though old habits can die hard. This Trope may also occur due to heterosexual actors feeling uncomfortable going too far with someone of their own gender. In historical shows set in time periods where it would have been unsafe for gay and bi characters to be out, this trope is probably due to Deliberate Values Dissonance and is arguably justified.

See also Get Back in the Closet for media with gay love content, but it is just rated higher than media with heterosexual love scenes and the like; and Closet Gay, where a character is hiding their orientation (which can be justification for this trope). There is some overlap with Hide Your Lesbians and Gay Romantic Phase. But Not Too Bi is a related but distinct trope most commonly manifested as a character who says they're bisexual but they never pursue a relationship with the a person of the same gender. See Have I Mentioned I Am Gay? when a show with supposedly gay characters doesn't ever reach even this level of physical affection between them.