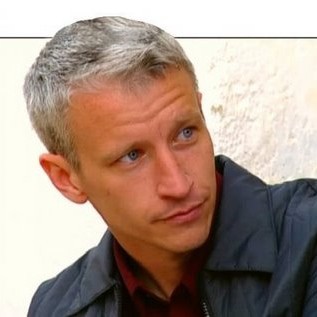 "You can't stop suffering, you can't stop terrible things from happening, but you can bear witness... The least us reporters can do is go there and tell their stories."
Advertisement:

Anderson Hays Cooper (born June 3, 1967 in New York City, New York) is a Peabody Award-winning American journalist, author, and television personality. During college, Cooper spent two summers as an intern at the Central Intelligence Agency. Although he technically has no formal journalistic educationnote his degree is in political science, he opted to pursue a career in journalism rather than stay with the agency after school, having been a self-proclaimed "news junkie" since he was "in utero."

After Cooper graduated from Yale University, he tried to gain entry-level employment with ABC but was unsuccessful. Finding it hard to get his foot in the door of on-air reporting, Cooper decided to enlist the help of a friend in making a fake press pass. At the time, Cooper was working as a fact-checker for the small news agency Channel One, which produces a youth-oriented news program that is broadcast to many junior high and high schools in the United States. Cooper then entered Myanmar on his own with his forged press pass and met with students fighting the Burmese government. He was ultimately able to sell his home-made news segments to Channel One.

Persuading Channel One to allow him to bring a Hi-8 camera with him, Anderson soon began filming and assembling reports of Vietnamese life and culture that aired on Channel One. Branching out from Vietnam, he also recorded news stories for the channel from Bosnia, Rwanda, and Somalia.

His time on Channel One got him noticed, as he had hoped, and he joined ABC, first as a correspondent and then as an anchor for World News Now. But then he left the news business entirely for two years, instead serving as the host of reality television series The Mole.

He returned to serious journalism in the wake of September 11, this time at CNN. After a stint with Paula Zahn on American Morning and another as the channel's weekend anchor, he was given the prime-time slot of 8 pm weekdays, for a broadcast entitled Anderson Cooper 360° that runs either one or two hours depending on that day's news stories. Never content to stay in a studio when he could be on location instead, he became famous for his coverage of international humanitarian disasters. 2005 in particular was a breakout year for him; in those twelve months, he covered the tsunami in Sri Lanka, Lebanon's Cedar Revolution, the Iraq War, the famine in Niger, and — in a series of broadcasts that won him a Peabody — the landfall and aftermath of Hurricane Katrina. By the end of the year, he was a household name, and in subsequent years he went on to cover — among many others — the Haitian earthquake, the Arab Spring, the nuclear meltdown at Fukushima, and the terror attacks which hit Paris in late 2015.

He also serves as the host of CNN's yearly CNN Heroes tribute and has anchored the channel's New Year's Eve coverage since 2002. His close friend (and eternal tormentor) Kathy Griffin joined him on the latter from 2006-2016. Beginning in 2017 his best friend Andy Cohen (of Real Housewives fame) came on as co-host.

Welcomed his baby boy Wyatt Morgan in late April of 2020, to the surprise and pleasure of just about everybody.

Oh yeah, and his mom was a bit famous; she was Gloria Vanderbilt

Media Cooper has been involved with: