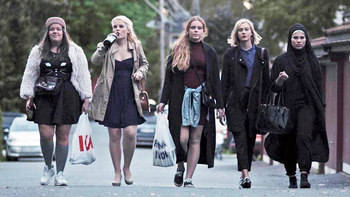 "You know, you don't have to face everything in the world on your own."
— Eskild Trygvasson
Advertisement:

Halla! Skam (English: Shame) is a Teen Drama created by Julie Andem for the Norwegian public broadcasting company (NRK), and currently one of Norway's most popular television shows. It's been lauded for touching upon issues such as friendships, relationships, mental illness, bullying, slut-shaming, sex, Islamophobia, the refugee crisis, and sexuality with veracity and aplomb.

First airing September 25, 2015, it follows the lives of a loosely-knit group of high school teenagers. The scenes making up each episode are made available on the show's home page

at irregular times and without prior notice during the week (usually five or six scenes per week), and between these scenes, other media are published in this stream, such as Facebook chats between the characters and pics or short videos from the character's (fictional) Instagram accounts, filling out the experience. On Friday night, the scenes from the previous week are made available as a regular episode (with "previously on" and credits) on NRK's web TV portal (more specifically here

) and sent on linear TV (NRK 3) as well. Fan-created subs have appeared online as the show has gathered attention from international viewers as well.

Each season revolves around a different protagonist. Season 1 revolves around Eva and her difficult relationship with her boyfriend Jonas. Season 2 is about Noora, a feminist struggling with her feelings for bad-boy William. Season 3 centers around Isak coming to terms with his sexuality and his tumultuous relationship with Even. Season 4 follows Sana and her struggle to balance her Islamic faith with mainstream Norwegian youth culture.

An American version of the show

, set in Austin, Texas, is currently in the works, and will also be directed by Julie Andem.

Skam is also being remade into a German, Italian, French, Spanish, Dutch, and Belgian version. Starting January the 6th of 2020, the French version grew beyond the source material, launching a fifth original season centered on Ensemble Dark Horse Arthur (Mahdi's counterpart) and being about invisible handicap, and a sixth centered on Original Character Lola, focusing on depression and addiction. Not having the right to make it about Daphné (Vilde's Counterpart) they created her a little sister. Two final seasons were released in 2021, focus on the new generation, original characters introduced with Lola. The 7th being about Defrosting Ice Queen and former Alpha Bitch Tiffany about Teen Pregnancy, and the 8th being about Lola's friend Bilal, focusing on poverty and social stigma.