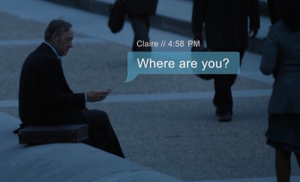 This occurs when a character is looking at something on a phone, which is small and hard to show to the audience, and the contents of the screen are shown as a pop-up floating somewhere in the midst of the action. This is done to avoid having the character either read or say what it is he's looking at, or the camera cutting to a tight shot of the screen over their shoulder or from their POV. In this way, viewers are kept in the loop without having possibly needless exposition dialogue or close shots that limit action in other places.

While most often used with cell phones, it can be used to show what's on any kind of screen without showing the screen itself.

by Every Frame a Painting has further examination and analysis on this trope in the first half (the second half is about the portrayal of the internet).

Contrast Sounding It Out, and Viewer-Friendly Interface, which is having impractical interfaces on computers that are easily seen by the audience.