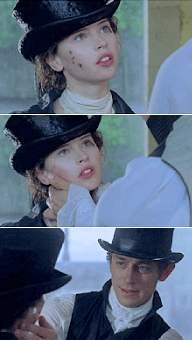 Best friends Alice and Bob are eating together, when Bob notices that Alice has gotten a bit of food on her cheek. Saying "here, let me get that for you", Bob reaches over to wipe it away with his thumb. The breathless Alice, having carried a torch for Bob for a long time, looks into his eyes and he into hers. Slowly, they lean in closer...

The Romance Inducing Smudge is any kind of smudge, stain, or blotch that causes one character to help clean it off of another, which leads to a romantic moment between the two. This serves as an excuse for the characters involved to get closer together than they otherwise normally would, and the ostensibly innocent touching involved is almost sure to increase romantic tension for the pair.

The stain need not be food related, though this is frequently the case. Similarly, the offending smudge need not be limited to an individual's face: a stain on their clothing that a potential object of affection must rub out can work perfectly well for this purpose, among other things.

If both people involved catch on to the mood of the scene, this can lead to a First Kiss between them. It is not uncommon, however, for the pair to be interrupted at the last second by someone else barging in or by one of the characters losing their nerve. Either way, this can work as a sign that one or both characters have feelings for the other, or serve as more fuel for the Will They or Won't They? fire.

Often used as a form of Ship Tease. Compare with You Taste Delicious, when one character decides to lick a smudge off of another, and with Finger-Suck Healing.

During a montage, Ham gets mustard on his face at lunch, and Crispin wipes it off. Judy tries invoking this by putting mustard on herself, but Crispin just gestures to her that she has food on her face.

During a montage, Ham gets mustard on his face at lunch, and Crispin wipes it off. Judy tries invoking this by putting mustard on herself, but Crispin just gestures to her that she has food on her face.