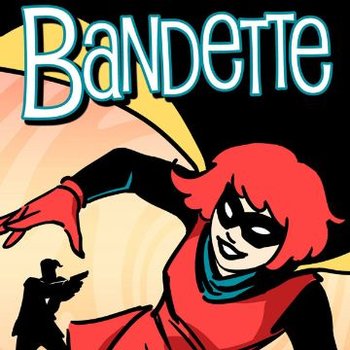 Bandette is a comic series written by Paul Tobin, with art by Colleen Coover. Serial issues are sold in digital format only by Monkeybrain Comics via Amazon's Comixology subsidiary

Bandette is a teenage girl superthief of art and antiquities, whose adventures are set in a lightly fantasticated Paris influenced by Tintin and the more romantic and playful end of French New Wave cinema. She has a band of helpers known as "the Urchins", friendly rivals in older thief Monsieur and cop Inspector B D Belgique (who she sometimes outright helps to catch nastier criminals), and a serious enemy in the malevolent secret society known as FINIS.