A Wolf in Sheep's Clothing 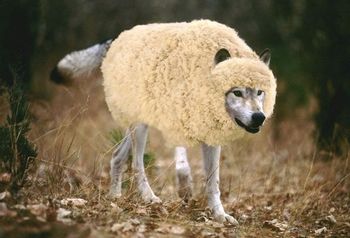 The wool does not go over these eyes.
I'm gonna keep my sheep suit on
Until I'm sure that you've been shown
That I can be trusted walking with you alone
Owoooooooo!
— Sam the Sham and the Pharaohs, "Little Red Riding Hood"
Advertisement:

The phrase "wolf in sheep's clothing" pertains to a character who disguises themselves as nicer or more harmless than they really are to conceal their true identity, feelings, or motives. Characters that are disguised this way might not necessarily be evil or intend malice, but when their lie is discovered it usually causes at least feelings of betrayal and distrust.

A Super-Trope to Bitch in Sheep's Clothing, where a Jerkass or evil character pretends to be nice to manipulate others, and Beware the Silly Ones where a character appears silly or innocent but is actually more dangerous.

A sister trope to Obfuscating Stupidity, Obfuscating Insanity, Obfuscating Disability, and Crouching Moron, Hidden Badass, all of which also involve presenting themselves as less of a threat in various permutations. Compare with Face of an Angel, Mind of a Demon, where an evil character looks like a good one, but whose appearance is not necessarily an affected disguise, and who is definitely evil rather than simply dangerous. Compare Nice Character, Mean Actor, where an evil character pretends to be a good one. May be a Churchgoing Villain or a Sinister Minister. Contrast Beware the Nice Ones, when the character actually is nice until you push them too far.

A form of Hidden Depths or Beneath the Mask. Often employed by The Mole in The Infiltration. If everyone is putting on a mask they are a Flock of Wolves. When this trope is performed literally, that is Ass in a Lion Skin.

Surprisingly not related to Sheep in Wolf's Clothing, which is when someone is partially turned into a monster but retains enough humanity to work against the monsters.