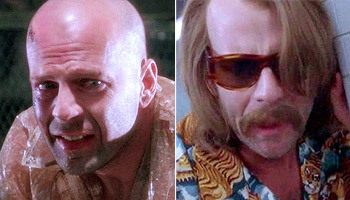 When a character uses physical props to disguise themselves. This is a staple of Spy Drama, where the hero will often use a wig and dress and affect an accent, thus the name of the trope. For impersonating a man, a fake mustache and beard may be used for extra facial concealment, and the dress is (usually) counterindicated.

While never as impenetrable a disguise as Latex Perfection, this disguise is usually plausible and may even fool the audience as well as other characters. If it isn't plausible, then it's a Paper-Thin Disguise.

Sometimes two boys will do this to be a tall woman in a trench coat.

See also Clark Kenting for how a disguise can be complemented by mannerisms and behaviors.