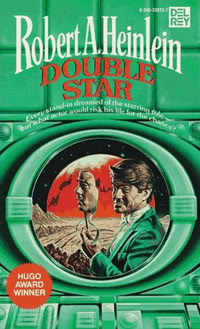 Double Star is a science fiction novel by Robert A. Heinlein first published in 1956 as a serial. It's The Prisoner of Zenda IN SPACE!.
Advertisement:

Lorenzo Smythe is an out of work actor. Brilliant at his trade, egotistical as hell, but completely unemployed. He receives an interesting job offer: impersonate someone so perfectly that no one will know he isn't the original. Only after accepting the job (under a little desperation) does he realize the person in question is John Joseph Bonforte, a famous (and infamous) politician who is the antithesis of every vague political opinion the generally species-bigoted Smythe holds. But he's accepted the job, and to hide Bonforte's kidnapping from the public, Smythe must learn to completely become another person in looks, thoughts, and actions—and to put aside his own.

Although Smythe is reluctant at first, he soon becomes interested in the political opinions he's now forced to advocate, and starts to make an honest effort to get along with the aliens and the political supporters he always tried to avoid in the past. And when he has to make an appearance at the court of Bonforte's long-time friend, Willem of Orange, Emperor of the Solar System, he finds himself enjoying his new role and the friendships it brings more than he'd imagined...