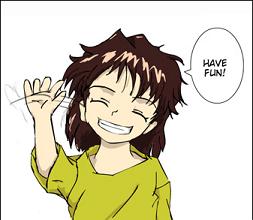 Somehow we doubt we'll have a problem with that.
Advertisement:

Following the events of The Second Try the Ikari family is back together. However, this is not the world little Aki Ikari grew up in, this is not the world Asuka and Shinji Ikari have been living in for the past seven years, and there is still quite a bit of work that needs to be done — for one thing, Mr. and Mrs. Ikari need to get remarried. So join Aki and her parents as they go through life, face the challenges of the world, and look darn cute doing it.

In other words, Aki-chan's Life is a primarily Slice of Life Fan Webcomic that acts as the sequel to the fanfic The Second Try by Jimmy Wolk (author of and The Ikaris and Long Time No See). The story is told in chapters, with each chapter being its own self-contain mini-arc, and the strips themselves are read right-to-left instead of the standard left-to-right. All similarities to Manga or Doujinshi are completely intentional.

Compare with Evangelion 303 — another Evangelion webcomic — and RETAKE — the most famous Eva doujinshi.