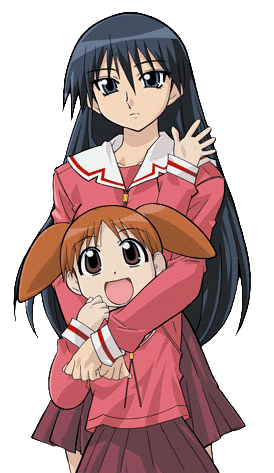 A supposed loner and a cute child come together to form... a protective older sister and an even cuter child.
Advertisement:

Wherein two characters interact and work together, and are designed to emphasize each other's positive qualities. Similar to a Morality Pet, except the boost is directed to the character's cuteness rather than their morals.

This can mirror, but not usually replicate, what could be a romantic pairing. Actual romantic stories tend to involve a lot of drama and seeing characters at their weakest and most awkward, occasionally becoming Plot Tumors if they become the sole definition of any given character. Sufficiently cynical fans are always wary of Character Derailment and Shipping Bed Death, while other fans are just very possessive of their beloved characters; they do not even want the potential to reach the Die for Our Ship stage. The problem is fans like the idea of the situation, but not the procedure and are worried that the hypothetical payoff is not worth it. The main differences between Romantic Couples™ and Moe Couplets™ are as follows:

Interestingly, the Moe Couplet often exists alongside an Official Couple, with the danger that if either overlaps, the audience might prefer one over the other. Occasionally, later installments featuring them might be hit with Character Exaggeration and actually gain official romantic overtones. Other times a show may be made up exclusively of Moe Couplets so Everyone Is Single.

In practice, only one of the characters really needs be designed like this, often a younger one whom the audience finds 'safe' and non-threatening. They are extremely popular in yuri and yaoi works, due to the natural maximization of Moe in the audience, but it's also present in other genres (particularly slice of life works that lack romance). The Wholesome Crossdresser (who is usually implicitly gay) has this relationship with Shoujo leads. In shounen, a (usually unattached) female co-lead has this relationship with the male lead if he gets his official girlfriend outside his circle of friends. Couplets are also common gimmicks in designing an Economy Cast. See also The Not-Love Interest.