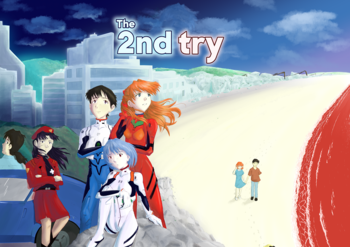 Written and illustrated by Jimmy Wolk.
"Sometimes, destiny offers people another chance. Sometimes just to undo small mistakes. Sometimes even to avert the end of the world. But sometimes, the price for another chance is higher than anyone could guess..."
Advertisement:

After Third Impact, Shinji and Asuka are the only humans left in the whole world, and they must carry on with only each other. And against all odds, they do, overcoming their own psychoses and insecurities and becoming better humans through it.

Then one morning, they both wake up to find that mankind has returned, they are in their younger bodies and living in Misato's apartment again, and only they have any memories of what has happened, and what is happening again, the little world they built for themselves destroyed.

And now they have to go through their most trying ordeals once more in the EVAs, and try to change history, while simultaneously deflecting suspicions of their changes, and coping with the loss of their old life.

) has both plotlines, but ya know what? It works. The story has Asuka and Shinji change vastly from how they were in the series, but in small ways, so that Shinji is still Shinji and not Chuck Norris or The Chessmaster, and Asuka is still Asuka and not Belldandy or Ty Lee, and the reasons for these changes are organic and make sense in context for the characters.

Jimmy Wolk has since begun a sequel webmanga

- which picks up right where the story leaves off. (Or rather, a week or two before the story actually ends.). He has also written The Ikaris and Long Time No See.

It has a crossover of sorts with Advice and Trust, approved by both Strypgia and Jimmy Wolk. In The "Chronicles