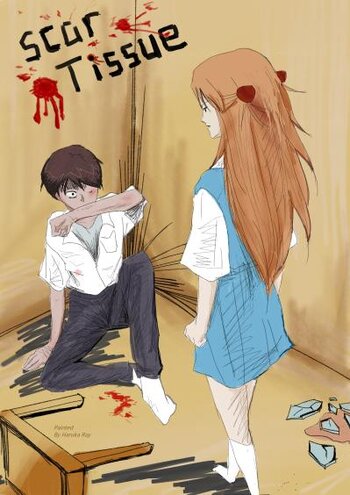 "There's nothing to say, Baka-Shinji. You've done some stupid things, I've done a lot of stupid things and somehow we're still here. It's like scar tissue, you know." Shinji lifted an eyebrow at her.
"Scar tissue?" he asked, intrigued.
"Yeah." Asuka answered, smiling as she noticed the long, vertical line going up her arm. "Scar tissue is never like normal tissue, it's broken, sensitive, disfigured and simply different from before, and it can never go back to what it was." She traced the calloused circle around Shinji's palms, for once feeling no disgust or rejection for the reminders of the power once given to him.
"But… scar tissue is stronger. It'll endure much more than normal skin or bone, because it's already been hurt but managed to heal and get better. It might never be the same, but maybe that isn't such a bad thing, after all. Maybe a scar or two are the true proof that you've lived and grown."
Advertisement:

It has been almost one year since Third Impact and humankind is slowly recovering. Unfortunately the Third Impact and Instrumentality have aggravated Shinji and Asuka's mental scars, giving them frequent nightmares and increasing their feelings of guilt and self-loathing. As a result of it Asuka becomes unable to control her temper and her behaviour gets increasingly abusive and violent, until one day she goes too far and nearly kills Shinji. Horrified at the result of her violence, she realizes how bad her attitude has become and she resolves to change and atone for her actions.

While both Children begin to mend their relationship, humanity struggles to rebuild a devastated world, the returning members of NERV get entangled in a web of politic intrigues, and SEELE prepares to strike NERV in order to seize the last remaining Evangelion.

In late September 2018, the final chapter of the story was posted, bringing the main story ofScar Tissue to a close. And in mid-2021, the entire story was revised by Deathbringer 374 with the help of Richitzer and Mister Halt, correcting typos and improving story flow. Additionally, Deathbringer 374 has announced he is working on an epilogue to the story.

open/close all folders
A-C
D-F
Advertisement:
G-I
J-L
M-O
P-R
S-U
V-Z
Two parts of the same mark, two wounds bound together by the slow healing process of growth. No more words were exchanged between them; there was nothing else to say. Finally their worst doubts, their dreadful insecurities and hesitations had been laid to rest. They felt stronger, different, forever to remain damaged in some way. Harsher, but sensible at the same time. Like scar tissue.