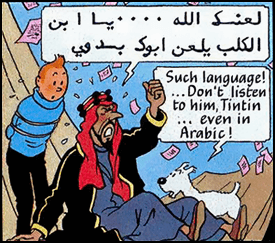 Sometimes a character comes from a country other than the one the show is set in, but contrary to the typical portrayal of foreigners, he speaks the language just fine. However, every so often, events get under his skin to such an extent that he can't think through how to say what he's trying to say in the language of the show, and instead simply launches off on a rant in his native language. Common enough in real life as well. Likely to involve Foreign Cuss Words in the middle (perhaps some that aren't even from Earth), but it's perfectly possible to have a completely clean rant as well. Angry kin trope to Eloquent in My Native Tongue.

Sometimes referred to casually as "going Ricky Ricardo" after the character on I Love Lucy, who was famous for this trope and is likely the Trope Codifier.

See also Foreign Cuss Word and Angrish, where the person gets so angry, they stop being able to speak in full sentences. May overlap with Even the Subtitler Is Stumped if a translation is attempted at first but then they give up. Compare Hiding Behind the Language Barrier, when two characters deliberately speak in a language that a third character doesn't understand.