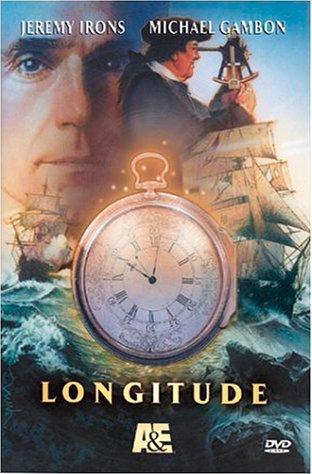 Longitude is a 2000 miniseries produced by Granada and A&E. It is based on Dava Sobel's 1995 book of the same title, which covers two stories: the solving of The Longitude Problem in the 18th century, and a historian's quest to restore the forgotten and corroded timepieces in the 20th.

As transoceanic voyages became more common in the Age of Sail, fleets saw numerous losses due to the inability to accurately determine one's longitude at sea. Unlike latitude, longitude lines are not parallel, and once away from land sailors had to rely entirely on celestial navigation (which was not always adequate). The best way to determine longitude was to know the time at one's present location and the time at another fixed point, but pendulum clocks were useless aboard a swaying, yawing ship. The matter came to a head after the loss of four ships and over 1500 men under Sir Admiral Cloudsley-Shovell off the isles of Scilly, thanks to poor navigation. In the wake of this disaster, the British government announced a competition for the invention of a timepiece that is functional and practical for shipboard use.

Enter John Harrison, a village carpenter and clockmaker. Harrison devises a marine chronometer that will keep time on a swaying ship. Complications arise during field testing as he struggles to make the device practical and compact, on top of which the astronomy-obsessed nobility of the Royal Society are outraged that they might be shown up by a village tradesman. Harrison and his son fight for over half a century both to create a clock that will work, and the Society's snobbish refusal to accept their results.

Meanwhile, in the 20th century, horologist Rupert Gould is recovering from a mental breakdown as a result of his time in World War I. He takes a volunteer position in the royal museum in order to restore Harrison's timepieces, now in a state of corrosion and disrepair. The work consumes him, straining his marriage and his emotional state as England again approaches the eve of war with Germany.

The two-episode series stars Michael Gambon as John Harrison, Ian Hart as William, and Jeremy Irons as Gould... along with the usual suspects from the British acting corps.