Who Would Want to Watch Us? 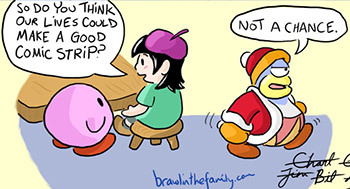 "It seems to me that neither I — nor for that matter anyone else — will be interested in the unbosomings of a thirteen-year-old schoolgirl."
— Anne Frank, The Diary of a Young Girl (June 20, 1942)
Advertisement:

The most common gag that leans on the fourth wall is when the characters are associated with a movie or TV production of their own adventures. If the idea is not just laughed off, the adventurous group have Hollywood types wanting to make an adaptation of their exploits. Further fourth wall fun can be had if the production crew within the show are made to resemble the production crew of the show itself, or parodies of them.

Expect Executive Meddling, dismissing of the unrealistic issues, Flanderization of characters, and if the show does get produced, a show that bears little resemblance to the stories we're used to (possibly it creates a rival show as a Take That!). A subset of Show Within a Show. Often an excuse for Recursive Canon.

Compare the Documentary Episode and I Should Write a Book About This. Compare and contrast Direct Line to the Author, in which the book/film/show/etc. about the cast's adventures is the actual book/film/show/etc., or Literary Agent Hypothesis, for when that is stated by fans instead of creators. May overlap with Film Felons if the character is using the production as part of some other plan. May overlap with Self-Parody if the in-universe show is Played for Laughs or indulges in melodramatic excess. See also Oh, Crap, There Are Fanfics of Us! and Other Me Annoys Me for cases where the character doesn't appreciate the way he's being portrayed.