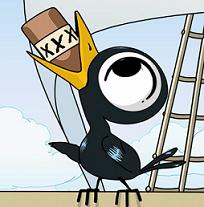 What, you were expecting something else?
Advertisement:

The Drinky Crow Show is about...a crow that likes to drink. And Uncle Gabby, his monkey-ish friend who likes to bed as many women as he can. The two go off on adventures on a ship with a captain and his daughter, with whom the monkey-ish thing likes to sleep. All the while they're looking for Drinky Crow's love of his life, a mermaid, and fighting French crocodiles. Occasionally, they get tied up in various schemes in an effort to either drink alcohol, bed women, or simply shirk from their French-killing military obligations (or any form of responsibility, really).

Based on the comic strip Maakies by Tony Millionare, this series debuted "unofficially" on April Fools' Day 2008 on Adult Swim, and later "officially" the following fall. It became popular with fans for its far-out humor, but was cancelled

after only one season due to the high animation costs. Though at the least it was given a Grand Finale.

Some tropes used in this series are: