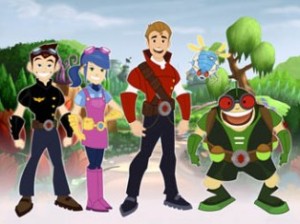 In the year 3000, Earth has become overrun by alien species of insects coming in all shapes and sizes. With the world's government being completely unable to deal with these often strange and deadly creatures, a dangerous rift between humanity and nature has begun to appear.

Enter Dex Hamilton (voiced by Dwayne Hill), an Australian-accented intergalactic insect expert with an unmatched passion for all the creepy-crawly creatures of the universe. With the help of a team of offbeat characters (including a human-insect hybrid named Zap Monogan (Lyon Smith), a cloned Wrench Wench named Jenny Ten (Stephanie Anne Mills), and a frog-like alien named Tung (Carter Hayden)), Dex Hamilton is dedicated to keeping Earth safe while also protecting and studying the extraterrestrial arthropods he encounters by placing the bugs in a unique sanctuary called The Habitat. However, things are complicated by a mysterious and sinister figure known as Syrrus (Dan Chameroy), who is capturing and genetically modifying these same insects to create living weapons and wreak destruction throughout the galaxy.

A 2008 Australian-Canadian animated series co-produced between Canada's March Entertainment (also known for Chilly Beach and Yam Roll) and Australia's SLR Productions, Dex Hamilton: Alien Entomologist was the brainchild of Matthew Fernandes (who would later found Industrial Brothers, the studio behind such shows as Dot., Top Wing, and Remy & Boo). The series originally ran on CBC in Canada and Network Ten in Australia for a total of 26 episodes over a single season, but reruns popped up on Qubo in the United States in 2014. The show also had a made-for-TV prequel movie called Dex Hamilton: Fire and Ice.