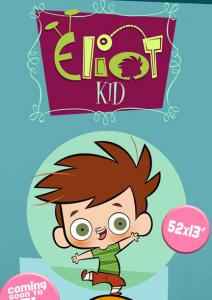 Eliot Kid is a Canadian/British animated children's television series composed of 104 episodes produced by Samka Productions, Safari de Ville, and BBC. The series was directed by Gilles Cazaux. Lead voices and voice direction for both seasons were conducted by animation voice director, Matthew Géczy. Canadian version and cast for both seasons were conducted by Kris Bénard.

The series features Eliot, a little kid with an overactive imagination that turns the most commonplace situations into Hollywood action-adventure blockbusters, along with his two friends, Mimi and Kaytoo. He lives with his mother Isabelle, the city's mayor, his dad Jeremy, a wacky inventor, and Suzie, his bratty but still so loving big sister.