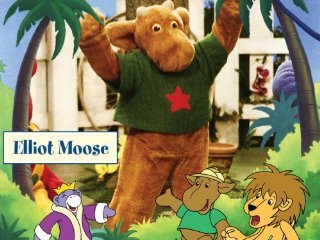 "I'm Elliot Moose! I like to play and with my friends I play all day!
My best friend Socks has a costume box so we dress up and then....

We pretend to be astronauts in Space! Or detectives solving a case!
Pirates, knights, explorers too! Then we come home again!"
—The only lyrics in the show's Expository Theme Tune that aren't "Elliot Moose is on the loose!"- which weren't even heard in the PBS broadcasts.
Advertisement:

Elliot Moose is a Canadian children's live-action and animated television series produced by Nelvana. The series originally premiered in 1999 on TVOntario in Canada, but later came to the United States in 2000 on PBS Kids as part of their Bookworm Bunch. The series is based on a series of children's books by Andrea Beck, its 104 episodes show the adventures of a young moose named Elliot who lives in a place called "The Big House". He goes on adventures with his friends; Beaverton, Lionel, Socks, and Paisley.

The series was developed by Jed MacKay and produced by Marianne Culbert. The series was unique in that half of the stories were animated, and half were live action; reflecting children's real world of play and their imaginary world. The music was composed by Bruce Ley and Jed MacKay.

You can find every episode on Youtube, courtesy of Nelvana's Treehouse Direct