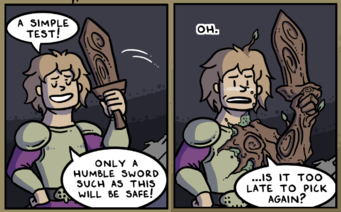 "When you assume, you make an ass out of 'u' and 'me.'"
— Classic proverb
Advertisement:

It's not that difficult for a character in a work to jump to conclusions. They might believe that they're a certain trope, that a different character is a certain trope, or at least that a certain trope is happening around them. But it turns out that they are very much wrong. And unfortunately, it will often take them until the end of the story to realize their mistake. In a Darker and Edgier story, they might not even realize the truth until it's too late for them to get a Happy Ending. In a Lighter and Softer story, only the villain will really be a victim to this and meet his/her downfall.

Some tropes in the The Wannabe Index (like Big Bad Wannabe, Casanova Wannabe, Prince Charming Wannabe etc) and Mistaken for Index are sub-tropes of this trope. There can be overlaps with Entertainingly Wrong, Hidden Depths, Horrible Judge of Character, Idiot Ball, One Dialogue, Two Conversations, and More Than Meets the Eye as well. Compare also with Wrong Genre Savvy, where a character acts as if they're in a different genre than what they really are. Compare Tragic Mistake.