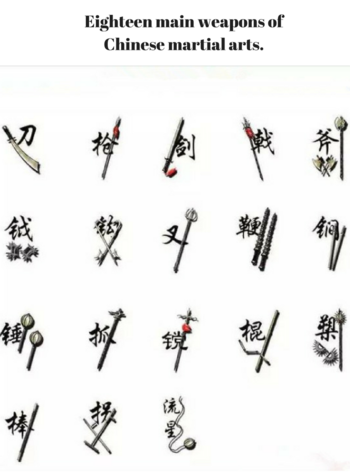 Settings based on East Asia tend to be quite popular with writers of all types and in media. Amongst the many possible features, martial arts often get the spotlight. However, sometimes the classical Bare-Fisted Monk alone doesn't do, for one reason or the other. This is where armed combat and weapons come in handy. Just as the katana screams "samurai" to most viewers, or the Dane Ax calls Vikings to mind, there are traditional weapons employed in Chinese martial arts (Wushu) that can be used to set the mood, reinforce the association and show that research has been done.

Traditional weapons are often referred to as the 18 Weapons of Wuji, and they include:

Of course, the trope doesn't refers to every single instance of such weapons being used by a character, but rather when they're used to convey the atmosphere of Chinese martial arts, or, in a fighting series, underline the fact of a character being based on said martial arts. Sometimes, said character will make use of a large variety of these weapons during the course of a single combat, showing the results of a superior training which allowed him to master several radically different weapons equally.

Compare Stock Ninja Weaponry, which is this trope used in the world of Ninja.