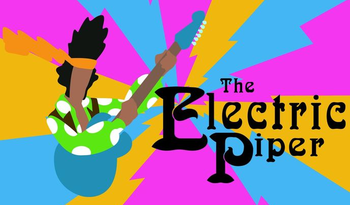 The Electric Piper is a 2003 Nickelodeon television movie that's essentially an animated retelling of The Pied Piper: in a town called Hamlin, rats are a common issue that only children noticed because their parents are too uptight. Our two main characters, Mick and his sister Janice, meet a mysterious guitarist named Sly who offers to take care of the rats, only for the mayor to push him away. (Sly wanted his Harley motorcycle in exchange) Overjoyed, the rats start a full-scale takeover of Hamlin, finally getting the mayor to enlist Sly's help.
Advertisement:

After he sends away the rats, however, the mayor refuses to give up the Harley. In retaliation, Sly convinces the town children to live with him in his cavern.

It was originally aired once and then remained lost for over ten years, after which a miracle happened; in August 2016, someone contacted an anonymous Nickelodeon employee who happened to have salvaged a copy of the film. It wasn't long before the film sprouted all over YouTube, although chances are slim it'll air on Nick again.