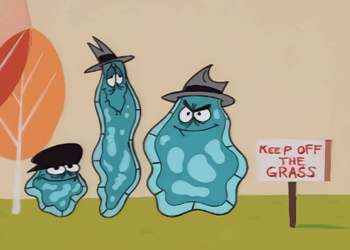 The fiends!note Ironically, this inadvertently caused one of the biggest threats on the show, in the episode "Geshundfight".
"And when she arrives, I shall squirt her... with CITRIC ACID!"
— Jokerella, The Non-Adventures of Wonderella, "For Whom the CELL Tolls"

Villains are vile, ruthless, merciless, and bloodthirsty; any pretension of civility is just a smokescreen to hide a really twisted Big Bad. Not exactly kid-friendly, is it? So what are kids shows and movies supposed to do, if the original source's baddy Eats Babies? Why, make them a harmless villain, of course!

Their goals can be as grandiose as any other villain's, but the way they go about their plans makes one wonder what they would do if they ever win. Instead of putting the heroes through a Death Course, it will merely be an obstacle course strewn with riddles. Rather than threatening to use Anthrax in the heart of London, they will use sleeping gas to get away with a heist. If they capture the hero, expect only the most benign of Death Traps (usually with a tub of Mr. Pibb instead of a Shark Pool); and instead of outright torture, they will use feathers to tickle the hero into submission. Or, they may say they are trying to do something truly evil, but they will fail, every time. And if that level of detail is too demanding for your kid detective story? Just make them smugglers. Smuggling what? Nobody knows. It is never specified. But smuggling is bad, that is why they are the villains and that is all you need to know.

Specific evil plots will usually include amazing MacGuffin devices that mildly inconvenience people and get the hero involved; often, these plots are of such a scale and intricacy that if someone Cut Lex Luthor a Check, they'd be so rich, they wouldn't need that giant Gold-only Orbital Magnet to steal the world's supply of gold.

But, then again, where's the fun in that?

The only people "seriously endangered" by them are the Innocent Bystanders and Damsel in Distress that they occasionally capture, and they end up no worse for wear than if they'd spent the afternoon in a Time Share seminar, which is usually far less entertaining at that, and the villain will probably even provide far better snacks, along with room and board!

The Harmless Villain might possess an impressive array of powers, but they'll end up using it with all the effectiveness of Misapplied Phlebotinum, or have glaring and easily exploited weaknesses that bring them to their knees just in the nick of time.

Basically, they aren't saddled with a bag of Villain Balls so much as they're expert jugglers, using them to entertain rather than as signs of stupidity (it is a kid's show, after all). It's more or less as if they are enforcing on themselves the Designated Villain role. A few of them are even aware of this, and are pretty easy-going about it. These amiable villains will more often than not show that Even Evil Has Standards when that Very Special Episode rolls around. Out of all the villains, they're the likeliest to enjoy a good time with Villains Out Shopping, or even be Friendly Enemies with the hero!

A true Harmless Villain will never Kick the Dog, much less cross the depravity line. However, they will Poke the Poodle...a LOT.

Their minions are as often as not Faceless Goons and comically good Mauve Shirts, both of which tend to do kooky and funny things when their boss isn't looking. These supposed villains often have a degree of Karmic Protection because of the small scale of their "evil", especially when there are more serious villains around.