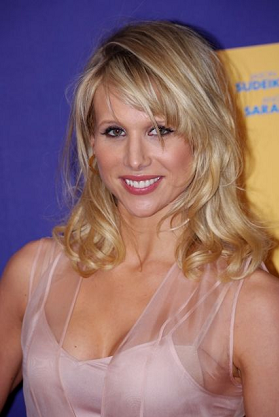 Lucy Punch (born December 30, 1977 in Hammersmith, London) is a British comic actress, typically cast as dim and conceited characters who deserve their comeuppance.

The London-bred Punch attended UCL to study French and art history, but was offered an acting job and subsequently dropped out. That role was Eveline in the period sitcom Let Them Eat Cake. The series bombed, but Lucy quickly became a known face on British TV. By 2004 she had graduated to film work, but migrated to Los Angeles to star in the short-lived sitcom The Class.

Then came the rocky patch. Finding herself out of work, Punch barely scraped together cash for an economy flight to London, where Woody Allen was holding auditions for You Will Meet a Tall Dark Stranger after his star, Nicole Kidman, dropped out due to a scheduling conflict. She nailed it; and thus began her life as a Hollywood "It" girl.

Is also known for being type-cast as one of Cinderella's stepsisters. In addition to the film versions of Ella Enchanted and Into the Woods, there were also two obscure British film versions of the story. Keep in mind, most intended to invoke the Grimm's "beautiful, with fair faces, but evil and dark hearts" type of stepsister and not the pantomime-esque "Ugly Sister".