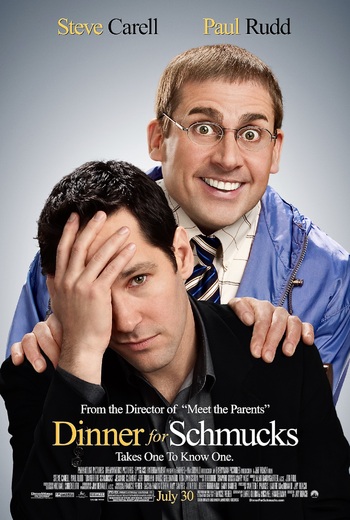 Dinner for Schmucks is a 2010 American remake of the French comedy The Dinner Game, directed by Jay Roach and starring Steve Carell and Paul Rudd.

Tim (Rudd) is a member of a highly competitive corporation, filled with sadistic bosses, cutthroat coworkers, and devoted secretaries. He works day in, day out, to make enough money to support his girlfriend Julie (Stéphanie Szostak), whom he loves dearly and desperately wants to make his fiancée. One day a fellow coworker is fired, and immediately people begin to discuss who will take his job. Later, in a presentation, Tim makes a daring move to get respect from his bosses, much to the horror of his coworkers. Surprisingly, it goes incredibly well. They tell him that he's in line for a promotion, if he attends a "dinner for winners", an annual event to find the biggest idiot for comedic purposes.

Meanwhile, Julie has landed a curator deal with an eccentric artist named Kieran (Jemaine Clement). He takes that opportunity to propose, hoping she'll say yes. She turns him down, as it turns out she had done multiple times before. The conversation turns to Tim's potential promotion and, in extension, to the actual "dinner for idiots." She is not very happy with the idea of the dinner, however. He agrees not to do it. Later on, he meets Barry (Carell), a taxidermist who loves to make mice dioramas. Tim has found his idiot. Despite agreeing not to do it, Tim decides to take Barry with him to the dinner.

Before that, though, he takes him to his apartment, where Barry notices Darla (Lucy Punch) IMing him. Assuming that Tim is involved with Darla in some way, Barry makes some flirtatious replies in an attempt to be helpful. Unfortunately, it turns out that Darla is really Tim's Psycho Ex-Girlfriend doubling as a Stalker with a Crush, who Tim has been trying to get rid of for quite a while. Meanwhile, Kieran is becoming... fond of Julie as Tim is trying to hide the fact that he's not only going against his agreement with her to not go to the dinner, he's taking Barry as his idiot as well. Along the way, numerous mishaps happen. It also features a blatant ripoff of Aldous Snow.

Dinner for Schmucks provides examples of the following tropes: