Literature / After the Funeral 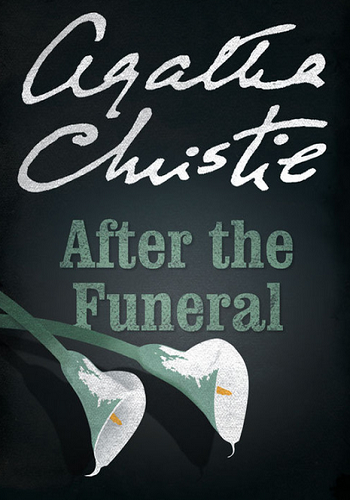 After the Funeral (published in the US as Funerals Are Fatal) is a 1953 novel by Agatha Christie, featuring Hercule Poirot.
Advertisement:

Wealthy Richard Abernethie dies unexpectedly, and his several surviving relatives, who hardly keep in contact with each other, gather for the funeral. His much younger sister, the ditzy and dreamy Cora Lansquenet, blurts out that he was murdered by someone of the family, to everybody's apparent shock. Cora is immediately apologetic and says she was mistaken, so the discussion doesn't go any further, but just one day later, Cora herself is found brutally murdered…

There was a Lighter and Softer film adaptation in 1963, replacing Poirot with Miss Marple (played by Margaret Rutherford). The novel also got adapted in 2006 as one of Poirot episodes.