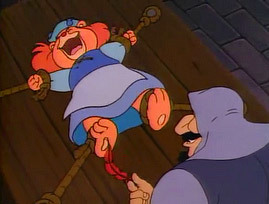 So, we have a Card-Carrying Villain in a G-rated show who is going to inflict a horrible torture on his victims. Most normal methods of Cold-Blooded Torture would be way too dark for something aimed at children; what can be a substitute? Tickling, of course! Anyone ticklish can attest that getting tickled without being able to stop it would be pure torture, and the censors are content that the character isn't being horribly brutalized. This is usually done with a feather on the soles of the feet (despite not being the most effective method in Real Life), and it is often led up to by the tickler saying "We Have Ways of Making You Talk."

This trope was so widely used in cartoons from the 90's and earlier, many a kinky adult can trace their...inclinations to watching these scenes as a child. See also Accidental Tickle Torture for the unintentional variant, and Friendly Tickle Torture, for, well, the friendly variant.