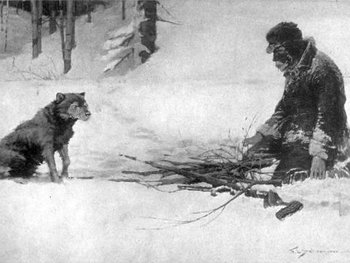 Even the simplest tasks can prove all but impossible if it builds drama to delay their completion. Fleeing victims drop the keys to their intended shelter; cars that worked fine five minutes ago will perversely refuse to start; merely running across level ground will prove more than the pursued can handle.

And lamps, fuses, trails of powder, bonfires or explosive gases never, ever light when you need them. Matches get dropped or blow out, and lighters spark in vain, their butane exhausted. An unprepared would-be pyro may even remember everything they need to start a blaze, except the means of ignition. Whether it's necessary to incinerate the monster, blow up the villains' Doomsday Device, kindle a campfire to avoid freezing to death, or even go out in a literal blaze of glory, no fire in fiction ignites easily if Rule of Drama is better served by it refusing to do so.

Sister trope to Dangerous Key Fumble and My Car Hates Me. Cigar-Fuse Lighting, Couldn't Find a Lighter, and Reusable Lighter Toss all subvert this trope via Rule of Cool. Played straight in many a Kids' Wilderness Epic or Horrible Camping Trip.

Alternative Title(s): Down To The Last Match